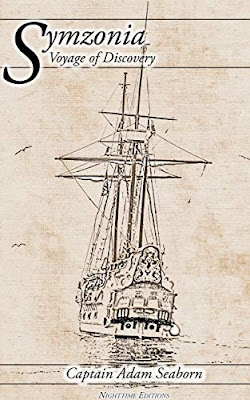 We made rapid progress, and were soon in the latitude of Sandwich land, as laid down in the charts, where we met with nothing but clear blue ocean. I hauled up S. S. E., true course, and stood on as far as 68° South, making the best use of my time by daylight, and drifting back upon my track during the short interval of night. On the 2d Nov. in lat. 68½, we met with ice in detached fields; and had strong gales from S. W. with raw, drizzly weather. I edged away to the eastward, intending to keep near the ice, and hauled to the southward, when a clear sea would permit. The first day, we kept the ‘blink of the ice’[1] in sight, and found it to trend nearly East and West. Made no southing this day. The second, we were enabled to haul up S. E. and by E. and continued this course without nearing the ice. The following day, hauled up S. E., set the engine in motion, and made rapid way; we observed this day at noon, in 75° 22′ S. I was elated with the prospect of reaching a much higher southern latitude than any former navigator had been able to gain, and pushed on as fast as canvas and steam could drive my vessel.

[1] ‘Blink of the ice.’—This is an arch formed upon the clouds by the reflection of light from the packed ice.